Principles for building the repertoire of Estonian theatres in 1986–2006 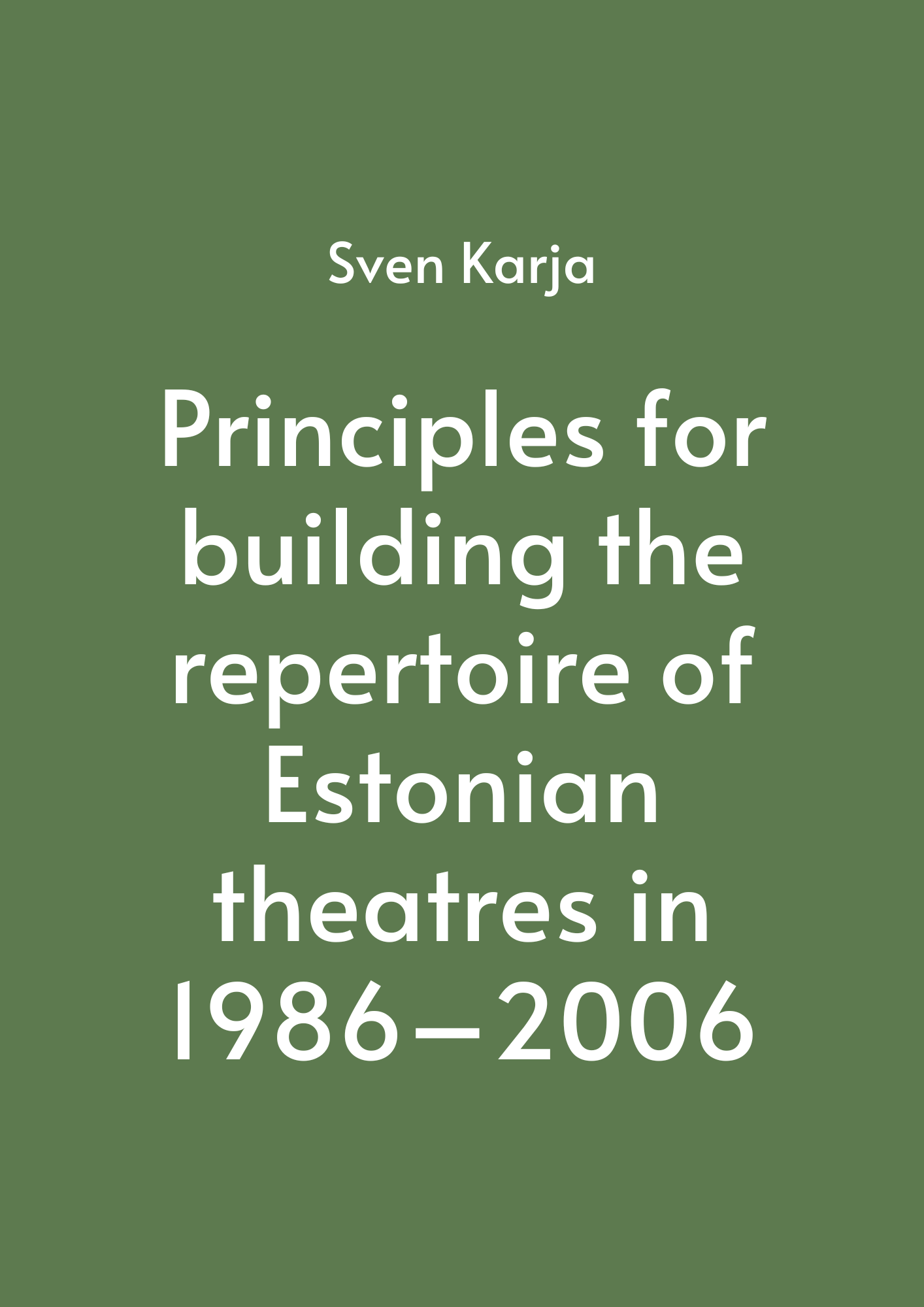 English summary. The article examines the factors which shaped the repertoire of Estonian theatres from 1986–2006. Estonian society was during this period stepping from one social formation into another, from the era of the ESSR (Estonian Soviet Socialist Republic) to the epoch of the newly regained independence of the Estonian Republic. Important changes were under way in Estonian theatres as well, being clearly reflected in the repertoire development. Under the totalitarian regime, the theatre repertoire was naturally subjected to all-round ideological control in the equal forms of preliminary and repressive censorship. All items of the planned repertoire had to pass the joint preliminary censorship of the Ministry of Culture, Glavlit (General Directorate for the Protection of State Secrets in the Press and the Central Committee of the Estonian Communist Party); the finished production underwent a thorough scrutiny as well. With several of the more provocative producers, obtaining a permit to perform in front of the audience could be a long and multi-stage process because at each closed rehearsal the censors discovered new ideological “mistakes”. In the most extreme cases (Merle Karusoo’s student production “Full Rooms”, 1982), the production was not allowed on stage. In such a political period, it would have been unthinkable to use the form of devising theatre, which has by today become fairly common, where the preparation of a production does not start with the search for ways of interpretation of the written play, but the text to be performed will be ready (often, in collaboration with the actors) by the first night, and some parts of the text (or all of it) can be freely ad-libbed at the performances.

In 1991, the cultural organisations of the independent Estonia had to change thoroughly their previous order of work. On the one hand – the censorship that had restricted creative work had been done away, and the paperwork required by the Ministry had lessened. In the first decade of the 21st century, the majority of Estonian theatres were reorganised into state foundations, which allowed them sovereignty in making their creative work-related decisions. On the other hand, the state financial support for theatres diminished considerably and the theatres were forced to increase their own earnings. This task was made even more complicated by the global developments in culture and economics. The postmodernist fragmentary view of the world “pushes” the theatre, which had become a cultural phenomenon of crucial importance during the period of the ESSR, into a more marginal position. The interest of especially the younger generation is rather focussed on other genres of art – film, music – and on all the genres that are closely related to the emergence of new media channels. As important is the widening of travel opportunities related to the opening of state borders, leading the Estonian theatre into a direct competition with the world theatre. In the local context, the theatre has to compete with all other cultural and entertainment institutions (cinemas, night clubs, sports clubs, other hobby clubs) for people’s free time. An important factor is also the burst of social activities in the second half of the 1980s and the highly emotional background of the (re)creation of the new state as well as the economic crisis of the early 1990s, which channelled the attention of people and society more on the topics of economic policies. The priorities seen in the repertoire of Estonian theatres at the end of the period under discussion (2001–2006) testify that equal stress was laid on the economic considerations (meeting the interests of potential target groups), new aesthetic pursuits, and on the wish to voice their opinion on Estonian social processes and to move synchronously with the ongoing processes in the world of theatre.

We need to pay special attention to important changes in the development of the arts in the early 21st century on the complexity of artistic code, the primacy of conceptualism, the withdrawal of coherence and emergence of associativeness and fragmentariness. In the context of theatre development, we could primarily talk about the marginalisation of narrativity and clear message as well as the important changes regarding the aesthetics of directing, acting and theatre space. In some cases, these changes in the Estonian theatre may have been so abrupt (in order to achieve synchronicity and to join the paradigms of the Western European contemporary exploratory theatre) that a noticeable part of the audience could not relate to what the stage offered. In a longer perspective, the result of such a communication block may be that certain spectator groups would drift away from the theatre and in turn reducing the numbers of the audience, but also marginalising the social context of the theatre. As the first remedy, the theatres would increase the share of more entertaining repertoire, which can only partly be justified. In the second half of the 1990s, we can see another renaissance of Estonian original plays (Madis Kõiv, Andrus Kivirähk, Jaan Tätte), as well as the growing interest of the public in new interpretations of the works of the Estonian classics. The boom of summer productions refers on one hand to the fact that the theatre is becoming a part of the entertainment industry and internal tourism, but on the other hand, among the summer productions are several significant and artistically solid works that remain in the history of the Estonian theatre. The aesthetic development of the Estonian theatre moves together with its organisational changes. New, smaller and more mobile theatres emerge and prove to be sustainable, identifying with some smaller reference groups of the audience (Theatrum, Von Krahl). At the same time, Estonia has inherited from the former regime several theatre buildings with large halls seating 500–700 people. “Filling” these halls, especially in smaller cities (Tartu, Pärnu, Viljandi, Rakvere) proved to be a difficult task for the theatres in these cities.

The present article is theoretically based on the book How to Study Art (2009) by the Dutch theorist Hans van Maanen, who sees the act of cultural communication in close functional relations fitting the creation, production, interpretation, communication, reception and the wider cultural and socio-economics of the work into a single integrated system. The notional lines of force, determining the resulting twelve subspaces, shape different socio-cultural processes and the birth process of a work of art starting from the moment of its emergence up to the possibilities for reshaping the reality. In the context of the theatre, this line could begin with the elementary preconditions for the emergence of creative inspiration (existence of the theatre tradition, theatre buildings, existence of professional actors and stage directors and potential audiences) and end with the complicated processes occurring in the sensory organs of the audience members.

The main part of the article deals with the transposing of the stages, presented in Maanen’s discussion, onto the development of the repertoire politics (which can be treated as an independent subspace) of Estonian theatres during twenty years, and with identifying its strategic focal points: which levers (aesthetic, economic, political) have been prevalent in the choices made by theatres? Who (theatre administrators or other institutions) have been behind these choices? How much have these choices been influenced by the profile, location and ownership form of the theatre? How has the process of shaping the repertoire changed in twenty years?